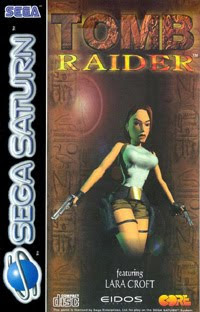 If I remember correctly, this was the first game we bought for the original PlayStation back in the day, and we also had a copy on the Saturn.
What a simply wonderful title. Many a gamer's opinion of Tomb Raider seems to have lowered as the years have gone by. I have spoken to those who see it as a cheap and unworthy franchise. While my opinion of some of the instalments that followed is not all that high, my loyalty to the original is unswerving. Even now, it is a delight. There is so much visible painstaking work on walls and textures and trims and items and statues. It was breathtaking at the time and still invokes feelings of awe. 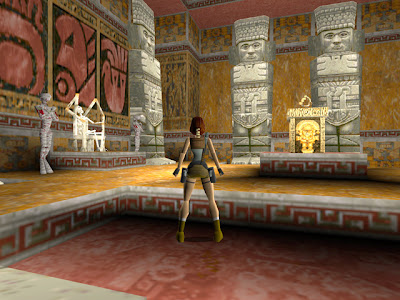 I do not like to judge old games by their graphics but rather by how they make me feel, but having said that, Tomb Raider really isn't too bad at all, even with triangular breasts considered.
As an innocent child I thought nothing of Lara's chest, and so I like to think I appreciated Tomb Raider for its actual gameplay and storyline. The gist of that storyline being that our heroine Lara Croft, though born into a life of luxury, was shunned by her parents when she decided she quite liked exploring places for artefacts, after being the only survivor of a plane crash in the Himalayas. The game booklet states that she funded herself through writing, and was famed for her site discoveries.
Lara was undoubtedly an influence on my younger self; I modelled my English accent on hers and I was undoubtedly inspired to be more athletic, at least before the full reality of a disability I inherited from my father hit years later.
Perhaps Tomb Raider is a strange choice of game to bring when you're staying with your mother-in-law, especially when there's a dog with the miraculous ability to stand in a position to whack the shoulder buttons with his tail. But I've been playing it for the past couple of days, and remembered enough to fluidly drift through all of the secret areas.

Lara starts out in beautiful Peru where her companion is killed by rather unrealistically-behaving wolves. Sealed inside afterwards, you must lead her through to the tomb of Quolopec, St Francis' Folly in Greece, fascinating obelisks and cat statues in Egypt, and fleshy, living corridors in Atlantis. Yep. Atlantis.

Why? Because a Ms Natla hired Lara to seek out the Scion artefact, although she is later betrayed and learns there are multiple pieces. Involving plot! I used to enjoy gunfights with Natla's henchman Pierre under the impression that he was French, although according to trivia he's a Breton like myself.

Tomb Raider is a 3D platformer. There's a lot of running, jumping and grabbing, and you don't stand still for long. It certainly is invigorating to run about so freely, although I must admit that after a few hours it can become grating and I'll need a break. Swimming was certainly a novelty at the time, although it can take a lot of repeated tapping to pull a lever in a panic. The pulling and pushing of blocks was a definite innovation, but very rigid and time-consuming. The title certainly has enough redeeming qualities to make people keep coming back to it.


The items in the game are simple 2D images that twirl around to face you, and the occasional background decoration is like this too, but I like that as it makes them stand out and you always know exactly what you're looking at from whatever side. Keys and the like are vastly oversized, but at least you can spot them. 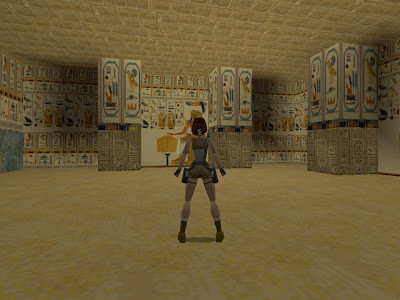 You have to dodge various traps on your journey. Darts are simple enough and they can be hopped over. The swinging axes are certainly intimidating, but not so bad once you time your movements carefully. Spikes however, are always deadly. Even if you're on the ground among them, running through will shred you to pieces. The fresh blood copiously coating them should worry you. There are a couple of opportunities in the game to drop down into a clear space among them, with great reward if you are successful. I'd recommend heavy using of save crystals before you think about trying it though. Make sure you're near a pool if you plan to be on fire at any time.

The secrets are sometimes obvious (e.g. lit door panels) but certainly rewarding, especially when you complete timed puzzles like that commenced by the pressure pad on the top of the Atlas doorway or the pillar-hopping escapade in the Colosseum. In the Sanctuary of the Scion level, don't forget to claim the Uzis from the invisible platform you can leap to from the top of the grand sphinx!!

There are a wide variety of (mostly endangered) creatures to battle, many of which wouldn't cause you all that much bother in real life. The important thing to remember is that it's not real. Then there comes the confrontational, screeching Atlantean race, dwelling within the impressive Sanctuary sphinx and pulsating, blood-soaked passages of their home. They are formidable opponents indeed.
Let's not forget certain velociraptors who mysteriously survived this whole time in a deep Peruvian valley and have voices like my old hair-dryer. 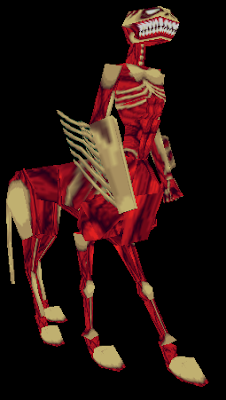 It's not too hard to get caught in a glitch, especially when you stand Lara in a tight spot where the ceiling meets her head. You can try rolling out of it but you won't always be lucky. There are however beneficial glitches, where you'll be shunted over to a platform you actually missed the jump to. There are a few consistency oddities, like the named gods in the Folly being a mix of Greek, Roman and Norse.
Face! 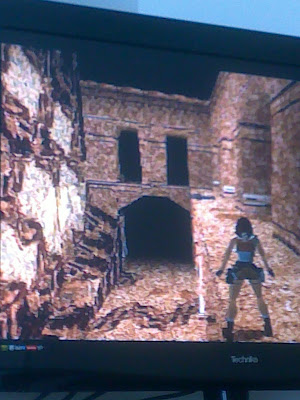 Smashing teeth in the Palace Midas secret missing their texturing 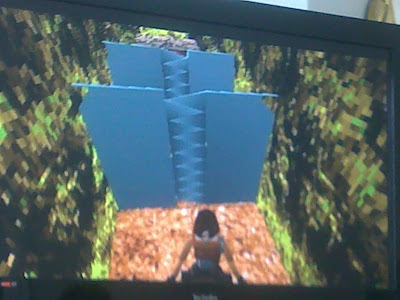 Animals killed in water remain floating when it's drained 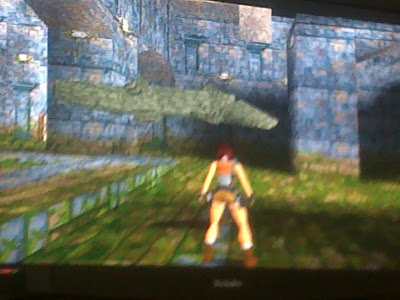 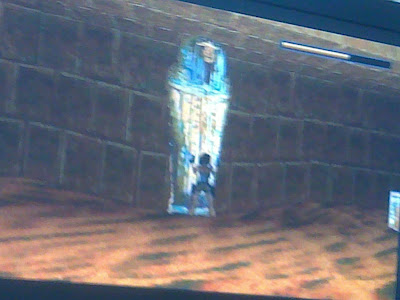 Tomb Raider is, of course, from the wonderful era wherein you could whack PlayStation disks in the CD player to enjoy the music and dialogue.
Nathan McCree's soundtrack is ever-brilliant. There have been many remixes of the theme over the years, but none top the original in my opinion.

Overall, this title is a game collection essential.

I've always been very fond of the Tomb Raider series. It was always a tradition of me and my sister to complete the games every summer. I used to write walkthroughs for them, of which there are many drafts, but doing so got grating after a while, especially considering the constant reusing of the words "run" "jump" "grab" and "rusty key". I replicated the beautiful designs on the Inca doorways at the beginning of the game when I made an A3 sketchbook cover out of papier-mâché for coursework. We had the Lara Croft memory card, and my parents used the packaging to mould Lara-shaped chocolate every year. Embarrassingly, my sister and I were dressed-up by our parents as Ms Croft to feature in PlayStation Magazine. We were awarded £100 each for our trouble though. 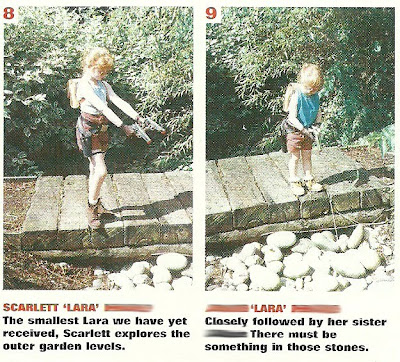 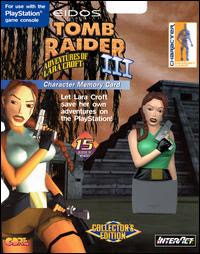